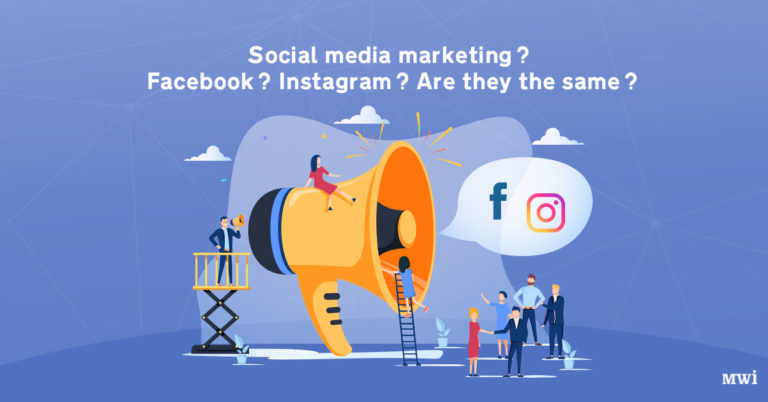 Have you ever been confused about the difference between Advertising and Social Media Marketing (SMM)? It can be difficult to tell, especially for newbies to digital marketing. How can the two be differentiated? Which category does Facebook Advertising fall into? What’s paid reach and organic reach? Is one more superior than the other? We’ve got you covered in this article, where we will guide you on distinguishing between Advertising and SMM.

A noticeable difference between Advertising and Social Media Marketing (SMM) is be the flow of information. Even though advertisers are keen on evaluating the effectiveness of their ads, the primary objective is not necessarily to understand the audience. The objective of advertisements is to carry messages from businesses to the public, like a one-way street.

If Advertising is a one-way street, then SMM could be understood as a two-way street. In addition to gaining publicity, audiences’ feedback is another crucial component of SMM. This feedback, or as we normally say, engagement, not only serves as an important input for market intelligence and customer relationship management (CRM) but also to facilitate word-of-mouth marketing. Many successful SMM campaigns capitalize on the viral effect, relying on public engagement in spreading messages. The interaction between businesses and the audience under SMM resembles the feature of a two-way street, a clear distinction from advertisements.

This leads us to our second question: does the reach of these two methods differ?

Advertising is a paid promotional effort which allows businesses to reach beyond its existing fan base, more commonly known as ‘paid reach’. These paid promotions, including Facebook Advertising and Instagram Ads, boost businesses’ overall outreach by reaching out to new users. On the users’ side, advertisements are clearly denoted as ‘Sponsored’, hence assisting them in identifying ads.

In contrary, SMM is concerned with the organic reach of businesses. Given that posting on social media is free of charge, the visibility of free postings is thus referred to as ‘organic reach’. Organic reach may fluctuate significantly depending on various factors, like engagement levels, the size of the existing follower base, or even the overall mood and landscape of the social media platform. It can be difficult for SMM content to reach new customers as organic reach becomes more limited than ever before. This may also explain why businesses are embracing Social Media Advertising in recent years.

Time-limited information, such as instant deals, has to be spread as quickly as possible. In this sense, the volume of lead generation is of greater importance than developing a long-standing connection with the audience. Therefore, Advertising could be a more preferable option than to engage in SMM.

Some purposes could be too costly for Advertising to achieve. SMM can often be utilized for non-profit-generating activities, for instance, promoting customer relationship or company culture. It is common for companies to showcase their team culture by posting behind-the-scenes or team activities. However, it is rare for such postings to be used in Advertising as their key purpose is not to generate profit but to induce engagement and improve peoples’ understanding of the company.

With a seemingly different range of purposes served, Advertising and SMM have different implications in separate time horizons.

In the short-run, Advertising would see a greater effect than SMM. Promotional activities would be more likely to draw immediate attention from the audience, benefiting from the extended ‘paid reach’. SMM, however, may fall behind given its relatively limited organic reach.

Expanding into the long-term, SMM is generally more influential than Advertising. SMM builds its success over nurturing a continuous flow of organic traffic. Everyone, including targeted audiences, loves quality content. By providing content that people value, businesses may gain the trust and respect of users and eventually be able to monetize the audience.

Advertising may fall short in the long-term, as its content may depreciate. It is questionable whether the general public is interested in digging up old advertisements to read and be swayed. As such, the effect of Advertising typically only lasts for a short period of time.

After going through a detailed comparison between Advertising and Social Media Marketing (SMM), it is time to analyze how the two can be interrelated. Instead of seeing them as substitutes, the two should be complements that work together as one in social marketing plans.

The importance of both organic and paid traffic must not be overlooked, as they are beneficial to ventures in realizing their business objectives. For initial phases, paid traffic from Advertising could be of greater significance as growth accelerates, while organic traffic from SMM extends to sustained growth in subsequent stages.

Businesses may also have different considerations in determining to what extent they implement advertising and SMM. Resources and time constraints, as well as the nature of the business, may limit the options available. To illustrate, a seasonal business may place greater emphasis on ads during peak seasons and then work on SMM during low seasons. Comprehensive planning is useful in coordinating advertising and SMM activities, making good use of resources under different circumstances.

As there are no one-size-fits-all social marketing plans, each business has to evaluate the optimal mix between their Advertising and SMM efforts accordingly. It is essential to use the correct strategy for the correct objective. Every business has a unique path to growth. A customized strategy from MWI will help you find it.

Get in touch with MWI today and let us curate your social marketing plan together.